Our school is named after the H.M.S. Alderney Ship, which was built in Kingston, England in the year 1742.  It was originally used in the navy, but in 1749 it was decommissioned and converted into a transportation vessel.  The Alderney was employed to bring settlers to the New World and arrived in Halifax late in the summer of 1750.  Under the orders of Governor Cornwallis, the settlers were instructed to disembark on the east side of the harbour.  The 353 settlers commenced to lay out a township.  They named their new home Dartmouth, because of its similar landscape to Dartmouth, England.

Today Alderney Elementary, Alderney Manor,  Alderney Chapter of the I.O.D.E., Alderney Landing and Alderney Drive have been named in honor of this immigrant ship. 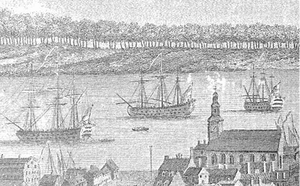